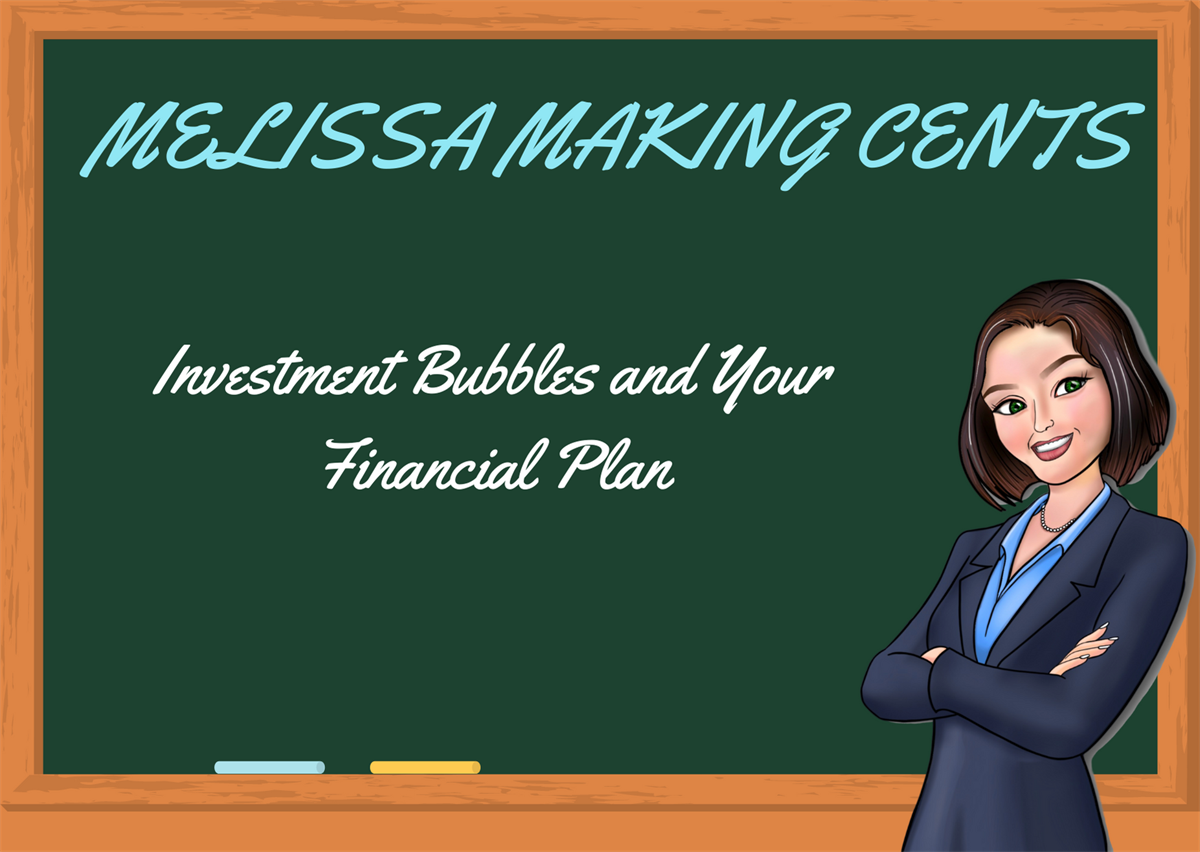 Investment Bubbles and Your Financial Plan

Investment Bubbles and Your Financial Plan

As a CERTIFIED FINANCIAL PLANNER™ and a financial coach, I’m acutely aware of the unrest people have when it comes to the post-pandemic economy. After all, we’ve all been through quite a bit within the last year, and there’s talk of inflation, recessions, depressions, and bubbles looming in the air. I’m not a fortune teller, so I’ll avoid giving my thoughts on this - however, what helps more than anything during times of financial hardship is knowledge. Owning the financial know-how enables you to understand what’s going on, which allows you to make more informed decisions about your own assets. Today we’re going to be focusing on investment bubbles, what they are, how they work, and how you can plan for them. If you don’t know what an investment bubble is (or even if you do), stick around because we’re about to cover quite a bit of information that will help you understand them in-depth and how to plan and avoid being victim to one! 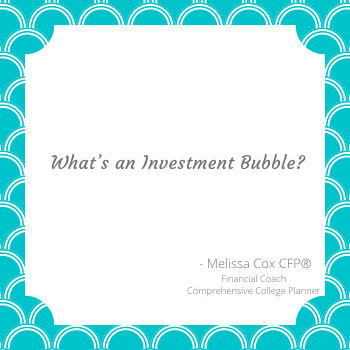 First, I’ll give you a loose and colloquial definition of an investment bubble, and then I’ll follow it up with a more official description. So, an investment bubble is essentially when people are over-valuing an asset. Because of over-valuing (usually due to speculation), the asset price in question rises drastically, which creates a bubble. This bubble often makes many investors a lot of money, but there’s one thing that all bubbles do - POP. When a bubble pops, it leaves heartache and chaos in its wake. Those who are still invested likely lose a large portion of their money tied to the investment.

Here’s a more formal definition from Forbes, “A stock market bubble—also known as an asset bubble or a speculative bubble—is when prices for a stock or an asset rise exponentially over a period of time, well in excess of its intrinsic value.”

If you’re going to be familiar with bubbles, it helps to know that bubbles operate in stages. These stages are clear indicators that something is a bubble and can help you identify a bubble even when your weird uncle or cousin desperately tries to get you to invest in stock over thanksgiving dinner. The stages of a bubble are as follows: 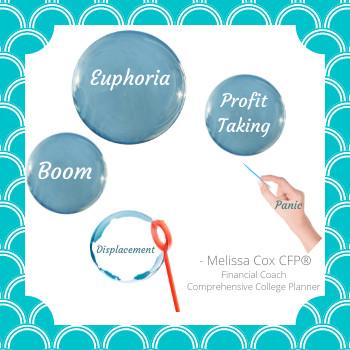 This is specifically a displacement of thought - not money. In the displacement stage of a bubble, the general population of investors begins thinking differently about a market. This can be caused by new technology, interest rates, or an event that’s taken place. In retrospect, this part of the bubble is easy to identify, but it can be problematic at the moment when everyone is frenzied over a particular idea or investment.

As people catch wind of an investment’s promise, they begin investing. This causes the price of an investment to boom or change from a slower-paced to a faster-paced increase in price. The rush of people investing in an asset generally comes with attention. This can be by the news media, social media, or even just word of mouth. Often during this stage of a bubble, stories circulate about people going from rags to riches and creating astonishing wealth by investing. What’s important to keep in mind is that while these kinds of stories and attention are unquestionably attractive, they are in fact few and far between and mainly based on luck instead of skill.

During the Euphoria stage of an investment bubble, people get so excited that they lose their sense of caution. The prices of the investments can reach abnormal and incredibly high prices, but those who view the bubble as a once-in-a-lifetime get-rich-quick scheme are too enamored to take some profit or cut their losses and continue buying into the investment. It’s also not uncommon for people to create justifications for the exponential rises of an investment to be able to claim it isn’t a bubble but it is one-of-a-kind.

During this stage, the bubble is beginning to show signs of popping. Perhaps the price has stopped growing as quickly or is slowly falling. Professional investors recognize this as being the late stage of a bubble and sell their investments for as much profit as they can at the time. For those who were early investors, they’ve made quite a bit of money at this point, and a slight fall in price isn’t going to affect their overall earnings too much. However, even if you know what you’re doing, this is an incredibly risky stage to be invested in a bubble because you never really know when the bottom will drop out.

During the panic stage, the bubble has popped or is in free-fall "actively popping". This causes investor excitement to change into investor panic. Just as there was a mania to buy in, there is now a mania to sell as quickly as possible. This drives the investment’s prices to perhaps all-time lows. This stage of a bubble is miserable and causes many ordinary and well-intended people to lose a lot of money that they often can’t afford to part with.

When Should You Worry About a Bubble? 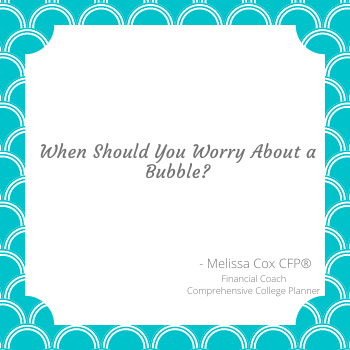 After describing the stages of a bubble, you may be thinking,  SHOULDN’T  everyone worry about one, and you’d be right to feel that way.  You should also be worried if you’d be directly affected by a bubble for some reason or another. Perhaps you have a complementary investment that a bubble popping would create hardships on (cars and gas; houses and lumber). You should also be worried about a bubble if you’re employed by a company that’s bubbled or in a bubbling industry. For example, when the housing market crashed in 2008, many who worked in construction were laid off because houses were not being built as quickly as they had been.

Should You Invest or Pull Your Money Out During a Bubble? 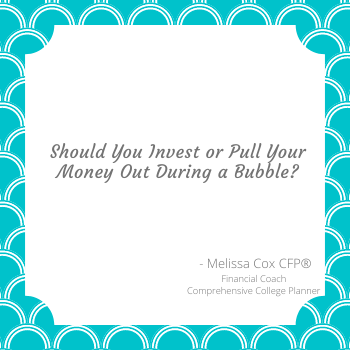 As a CERTIFIED FINANCIAL PLANNER™,  I’d likely never suggest buying into a bubble. I’m more for smart tried and true methods of creating wealth that is proven with time and practice. Investing in a bubble is much more of a gamble than most people would knowingly and rationally participate in. As a high-risk-high-return sort of gamble, you’d have to have an incredibly high acceptance of risk to invest in a bubble. Also, like gambling, the cards are always stacked in the house’s favor - meaning that the professional investors are much more likely to make a profit from a bubble than those who are speculatively investing on their own.

Something I’ve stated already, but will restate because of its importance is that no one knows when a bubble will pop. It’s something completely out of the hands of, well, everyone. You’d have to be omnipotent to know when the perfect time to invest and sell would be. It’s a mix of this incomplete knowledge and the high risk that would cause most people in my profession to recommend not investing in a bubble intentionally.

If you do think you’re invested in a bubble, the best thing to do may be to speak with a financial advisor representative or financial planner, like myself, who can help you navigate through it. The first thing we’d do is review the investment and decide whether or not we believe it’s a bubble. After that, we’ll assess your risk and decide when is a good time to pull out of the investment that will cause you to minimize pain.

What are the Biggest Bubbles Throughout History? 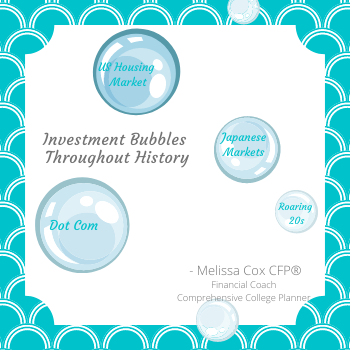 Also known as Tulipmania, the Dutch Tulip Bubble happened in Holland during the 1600s. This event caused the price of tulips to reach astronomical prices. The rarest tulips were being sold for more than quadruple the average salary.

Tulipmania began because tulips were originally an imported hot commodity. Many who came to Holland would buy beautiful tulips and give them to their wives. As this blossomed, so did the tulip business. Many of the local residents began harvesting tulips, which took about seven years to mature. This, combined with a new form of contract which made it easier to buy and sell large amounts of tulips, spelled disaster. As contracts became easier to create, buy and sell, people were purchasing and selling larger and larger quantities of high-value tulips that weren’t existent yet. This created a bubble, which eventually popped and created havoc for those who were in the industry.

The Mississippi bubble took place in France during the 1700s. After King Louis XIV’s reign, the country was very in debt. This spurred the government to look for wealth-building options. Along came a man named John Law, who had a promising proposition for the government. He had the idea to create a national central bank and a national state commerce company named the Mississippi Company. He sold stake in the lands that the French-owned in America to the general French population. To do this, he lied about how resource-rich the new country was and told tall tales about riches and wealth in the territories. For a while, this plan worked, and everyone was doing well. This lasted until rumors started spreading that the wealth and riches in the new territories weren’t as vast as Law made them seem. Because the bank printed more money than there was precious metal to back it, once word got out and people wanted precious metal instead of paper, prices crashed.

In more recent years, the Dotcom bubble happened from 1997 to 2002. This bubble was caused mainly by the way people thought about technology. Because the internet was so new and novel to the general public, investors were interested in purchasing anything technology or internet-related they could get their hands on whether the companies were profitable or not (even if they didn’t have a realistic plan to become profitable any time soon). This caused prices to quintuple in the period between 1997 and 2000. However, investors soon caught back up and began pulling out of tech companies that weren’t profitable, causing a drastic decline in stock prices. This, combined with 9/11, caused an upheaval of investor money being pulled out of internet companies. The Dotcom bubble popping was so drastic that it caused half of all internet companies to close. Even companies that were valued at millions of dollars found themselves going out of business within a year.

Most recently, in 2008, there was the great housing bubble. This is believed to have happened because banks were giving out loans to anyone. In fact, many believe the banks didn’t care if the loans were going to be paid or not because they would get their money either way through government programs that backed the housing market. So if someone got a loan and paid it - the bank got its money back. If they got a loan and defaulted - the bank foreclosed on the house and got their money back through a government program. However, this came to a screeching halt in 2008 and caused the housing market to collapse, spurring a great recession in the United States. 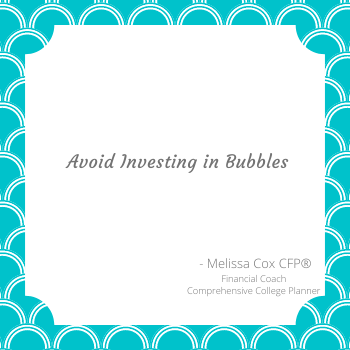 Really your best bet with investment bubbles is to be able to identify them and avoid them. Professional investors love it when the general public gets in on a bubble and drives prices up, but don’t let yourself fall for the mania. Instead, work on tried and true investing techniques that you can find right here in my blog. 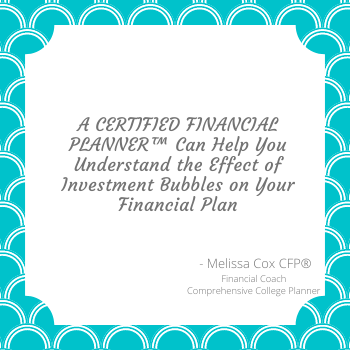 If you’re worried that you’re invested in a bubble, come talk to me. It doesn’t matter where you are right now; we can always work to get you in a better place. Playing with investment bubbles is a dangerous game so please, feel free to call or email to schedule an appointment with me. Together we can create a financial plan that helps you avoid bubble investments and generate wealth for you and your family. 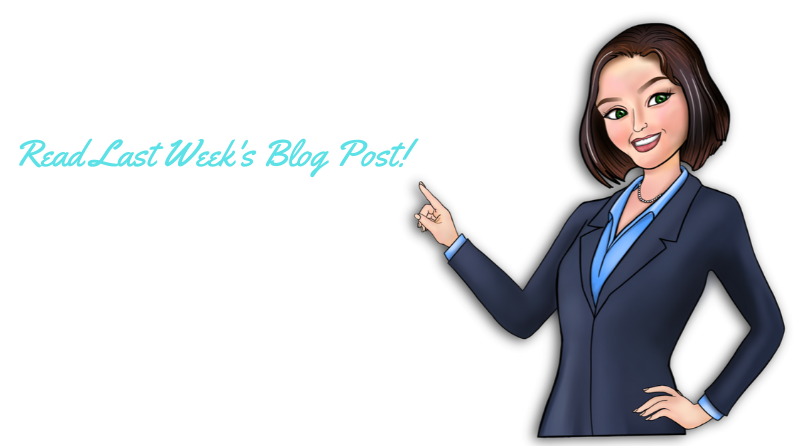